Let me just start by saying this recipe is in no way my own, but rather an amalgamation of multiple brilliant minds. I began searching for the perfect pork carnitas recipe long ago, and I found it in the depths of a paleo forum from 2011, published by a contributer named Priscilla. I live in constant fear that this post or this thread in general will disappear and I'll lose the original recipe, so I've decided to give it a second home here on my blog. This recipe in combination with the cauliflower tortillas from Slim Palate makes for one hell of a fantastic meal. 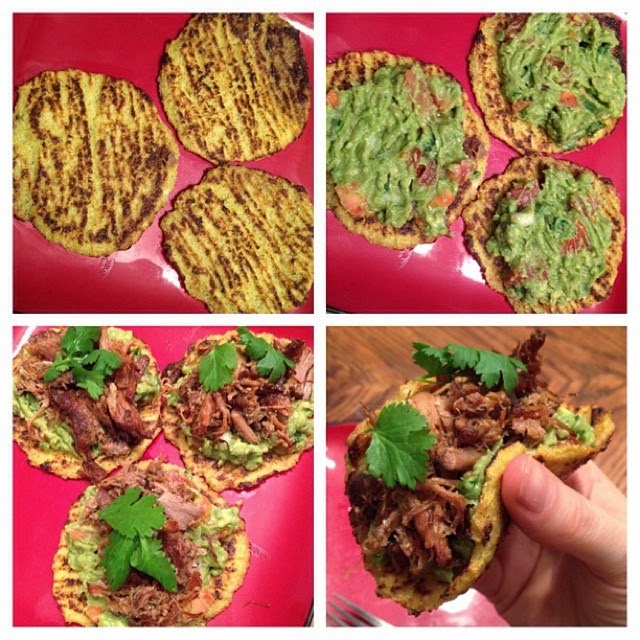 *Serves 2 with LOTS of leftover pork*

In a large mixing bowl, combine all seasoning. Cut the pork shoulder into large chunks (about 2" by 2", so you should end up with about 6 chunks depending on shape). Mix the pork chunks in the seasoning bowl, coating as evenly as possible. In a large pot, melt the coconut oil and briefly sear the pork chunks on all sides. Remove the pork from the pot and place into a crock pot. Chop the onion into strips or small chunks and add to the drippings in the pot, cooking until translucent. While these are cooking, squeeze the juice out of the orange and limes. Add the garlic and continue to cook for one more minute, then pour in the chicken broth, orange juice, and lime juice. Stir well. Allow to simmer for 3-4 minutes, then pour into crock pot on top of the pork. Cook on low for 6-8 hours. About halfway through, pull the pork apart with forks, then resume cooking on low. Heat the oven to 375 degrees. When the pork is done in the crock pot, pour the pork along will all juices into a large pyrex pan and cook in the oven until the juice is mostly absorbed and the pork appears crispy on top (30-45 minutes). While the pork is cooking (toward the end), pan-fry the tortillas and prepare the guacamole. Plate the tortillas and coat with a thin layer of guacamole. Layer each with pork (a few forkfulls provide enough for each tortilla; you want to be able to fold it!). Add a few sprigs of fresh cilantro and a slice or two of lime for garnish and serve.