Another product of having random ingredients in my fridge and throwing them together! These are great served as an entree or as appetizers. In this case, I served them as an entree alongside kale sauteed in the bacon fat. 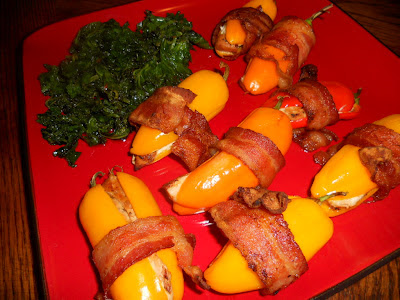 Directions:
Preheat the oven to 350 degrees. In a large pan, cook the bacon on low so that it gets a little crispy but is still mobile. In a separate pan, melt the tablespoon of butter. Tenderize the chicken, season with garlic powder, salt, and pepper and add to the pan, cooking on one side until lightly browned. While the chicken is cooking, spread the cream cheese evenly on one side of each mini bell pepper. Flip the chicken and turn up the heat slightly, then add the balsamic vinegar. After about one minute, flip the chicken again, allowing to sit in the balsamic reduction for an additional minute. Remove from the heat, slice, and place into the halves of the bell peppers without cream cheese. Re-form the bell peppers by putting the sides back together, wrap each one in bacon, and place on a lined baking sheet (silpats work wonderfully). Bake at 350 for ten minutes, then broil on high for about three minutes (keep an eye on them so that they don't start burning). Serve immediately. Nobody likes soggy bacon.