There was once a point in my life when I firmly believed that I had eaten my last omelet. With an omelet station readily available in my college cafeteria, I exhausted my appetite on the typical cheddar/bacon/mushroom/pepper combos. While in Vegas (before my gluten intolerance reared its ugly head), I ate a fantastic meal that they called a "Farmer's Breakfast." It consisted of toast topped with eggs and a fresh tomato sauce. The toast became a problem, but that's where I got the inspiration for this delicious monster omelet. 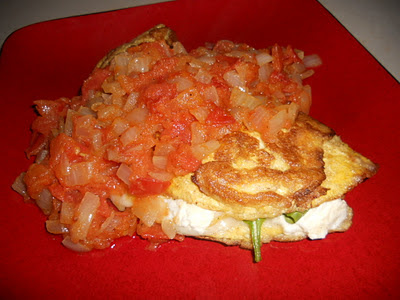 Directions:
Heat the olive oil in a saucepan on medium heat. Slice open the tomatoes and remove the seeds. Dice the tomatoes and the onion. Put the onion into the saucepan and stir; once they become clear, add the tomatoes and spices. Continue to stir until well blended, then let simmer until the omelets are done (stirring occasionally while cooking).

Directions:
In a large pan, melt the butter on medium heat. Mix the eggs in a bowl so that the yolks and whites are well blended. Pour the eggs into the pan and allow to cook through, then flip the egg mixture over. Break the swiss cheese into small pieces and cover half of the egg with it. Spread the ricotta and mozzarella on top of the swiss, followed by the arugula or spinach. Fold the empty half of the egg on top of the covered half, allowing the cheese to melt for about thirty seconds. Plate the omelet and cover with the tomato sauce.
Posted by Heather Boyd at 10:29 PM